It is primarily used for testing and diagnosing faults in wiring, machinery, appliances, circuit board components, and to test batteries, switches and power supplies. A test meter is the most important tool in an electrician’s kit, and is also used by technicians and those in the automotive and electronics fields, as well as by hobbyists.

Multimeters can also perform many other functions depending on what’s required, such as the measuring of temperature, humidity, sound and light, as well as heat by infrared. There are also data logging DMMs that can record any input range over a period of time for analysis on computers and trending through smartphones.

Digital vs Analog: the big difference with digital multimeters and analog multimeters is that DMMs use digital/logic technology to measure signals as opposed to a mechanical coil/magnet assembly that operates a needle. Although some people still swear by analog and they can have certain advantages (such as seeing fast changing signals in real-time), they play second fiddle to digital multimeters today.

Main advantages of digital: more accurately read, greater number of test input ranges, higher input impedance. Fluke brought in the first digital multimeters in the 1970s and there are two main types, handheld and bench. This article concerns the former.

There are several categories of handheld DMM:

These are the main ranges that are measured on all digital multimeters:

Many multimeters also have these secondary criteria:

Additionally, some multimeters can check:

Sensors can be incorporated to take measurements, such as:

Some push the boundaries and come with extra systems for collating data and analysis:

Data logging: monitor ranges to look for current draw, temperature changes, etc
Infrared: specialty meters like the Fluke 279 have built in infrared guns, which can quickly see faults in machinery/wiring

Others have dedicated ranges for checking batteries, usually those marketed for the automotive repair. Often have a range of 1.5V, 6V, 9V, and 12V, or basic ones 1.5V and 9V. Those for automotive typically load up the circuit with amperage to test the battery under load.

A digital multimeter interface usually has these four components:

The display is the most important part of a digital multimeter; without it you wouldn’t be able to see what’s going on. DMMs are much easier to read than traditional analog meters as they give more exacting values, such as 19.99 volts. Most display four numbers; for example: 19.99, 39.99, 59.99, or 99.99, and there is a specific set of criteria that determines this. A ‘4 digit’ display would show a maximum possible 99.99, where a 3½ digit unit can display 19.99 – more about this below.

Displays also show icons corresponding to the range they are displaying, such as ACV (AC voltage), Ω (resistance) or polarity, as well as warnings like low battery icon.

Having a display that is backlit is a definite plus, though some will only stay on for a few seconds. A sure sign of a good meter is one that has a high digit count, dual display (showing two or more values) and adjustable screen brightness, where the light stays on for more than a few seconds. 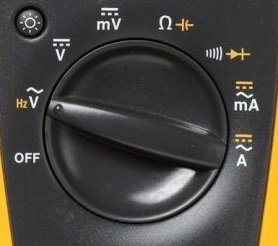 The main switch is typically a dial in the center of the meter, labeled with a number of units around it. Turn to select a given range (such as milliamps, mA) before you test with the probe leads. On many DMMs, a position on the dial may have more than one measurement range. This is usually the case with AC / DC amperage and also with resistance / continuity / diode checker. You switch between these ranges via a select button.

Most DMMs have an OFF position to power the meter down (turn on by selecting any range position), though some meters do away with this method by having a power button.

The main difference between dial types is so-called auto ranging and manual ranging multimeters. The latter have all of their ranges printed on the interface and are more cluttered and not as easy to use. Learn more on what is a digital multimeter and ranging below.

Although not a given, any half decent multimeter will have a complement of buttons. There are certain features that do not appear on the dial selector and which are needed to increase the functionality of the meter. The below functions are typically seen on midrange DMMs and up:

Select: to select another range on a given dial position
RANGE: to change between auto/manual ranging, and also to select manual ranges
HOLD: freeze values on the screen; may include an auto hold feature
MIN/MAX: automatically records low and high values detected by the meter
Backlight: turns on the display light 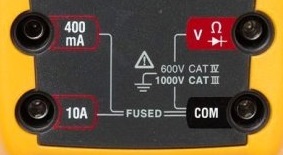 This is where the test probe leads that came with the multimeter plug into. There is a specific combination you must adhere to or you could end up damaging the meter. There are usually three or four input jack sockets at the bottom section of the interface, although pocket multimeters will often have just the two, or indeed be hardwired.

Common (COM): no matter where the red lead is plugged (voltage or current), the black, negative lead always stays here. Whether a multimeter has two, three or four inputs, there will always be a common, which is usually colored black.
Volts, ohms (V/Ω): this is where your red probe lead will spend most of its time, since it usually measures everything apart from current. If a multimeter has fewer than four inputs and has milliamps, it will usually be included on this input. Usually marked red.
10A (10 amps): you would plug your red lead in here when testing in the high current range. Usually marked red.
mA (milliamps): sometimes shared with micro-amps (µA), and used for checking low current signals. Usually marked red.

Test leads: these red and black (positive and negative) flexible cables are an integral part of the multimeter. They plug into the input sockets via ‘banana’ clips and are the conductors to the test subject.

Along with the probe leads, these inputs can also accommodate other devices, such as a thermocouple probe (for measuring temperature), a clamp (for measuring engine RPM), or an adapter for checking capacitors and transistors. Also, some special multimeters may have an optical output for connecting directly to a computer (via serial cable) or to a Bluetooth/wireless adapter. Data loggers typically offer this connectivity.

Positive Features of a Digital Multimeter

GOOD INPUT PROTECTION: denoted by the category (CAT) rating, input protection is imperative when testing higher voltages. Many hobbyists often overlook this when buying a DMM as it can’t be seen and probably doesn’t seem all that important. Input protection is the level of inclusion of electronic components that ultimately protects the user and environment. While not as important for low voltage situations, when testing mains, and especially if testing three phase systems, it is a must.

A combination of high rupture capacity fuses, shunt, MOVs, power resistors, blast shields and arcing isolation slots constitutes good input protection – having none of the above, including cheap fuses, does not. High energy surges can, and do, blow cheap multimeters apart.

Fast continuity: a sure sign of a good multimeter is one that has a very responsive continuity checker; one which preferably reacts almost instantaneously and isn’t too loud. A good set of probes can make a difference between a mediocre one and a decent one.

Auto/manual ranging: the multimeter detects the correct range when it auto ranges. It takes the human element out of the equation, where a manual ranging meter requires the user to select the right range, and thus extra effort. Better meters give the option to select between auto and manual ranging. This page describes ranging in more detail.

Auto power-off: shuts the power off after a period of inactivity, ultimately saving the battery. Cheaper meters often do not have this, leaving open the possibility of flattening the battery. More expensive meters may have a sleep mode to both preserve battery life and retain the currently measured reading.

Decent leads: can make the world of difference. People have been known to throw away their multimeter thinking it is broken, when in fact all they needed to do was replace the faulty leads. Good ones are silicone insulated and pliable, with a high CAT rating, finger guard protection and sharp probe ends.

Auto polarity: displays a symbol (+ or –) on whether the measured DC voltage is positive or negative – if you have a positive reading while the red probe is placed on the ‘hot’ positive terminal and the black probe is on the 0V or negative terminal, the meter would agree with the positive/negative configuration of the probe leads.

High input impedance: this is the multimeter’s internal operating resistance and is very important when measuring electronics in particular. Meters with low input impedance would affect delicate circuitry and give an inaccurate reading. Input impedance should ideally be 10MΩ as a minimum. Bench meters are in the gigohm (GΩ) range.

Accuracy: defined by how close a multimeter can get to within the specified value stated in its manual. Along with resolution (how small an increment it can measure), they are together defined by counts/digits, with a ‘±’ ‘+count’ error value. For precision, you are looking for a multimeter that is accurate and can measure down to a small resolution.

Prices (anywhere from $5 to $1,000) run the gamut and there are many brands. The long and short of it; most of the best known ones are produced in the USA and the cheapos are produced in China/Asia. This is not always so and there is some overlap, but the top brands are mostly US-owned. Fluke, Agilent (Keysight), Amprobe, Extech and Klein Tools all produce solid digital multimeters. Notable exceptions include Megger in the UK – best known for their high end insulation resistance testers – and Gossen Metrawatt in Germany.

Fluke is renowned for quality and safety and is the de facto, go-to brand for most electricians, however. They aren’t cheap, but you get a product you can rely on. Hobbyists could go with an Etekcity, Mastech, Uni-Trend or INNOVA if they don’t need that level of protection and/or don’t have the budget.