Here, we check the charge, or voltage, of your car battery. This is achieved by measuring the DC voltage of the battery in parallel with the multimeter. If you are looking to test for amperage draw (parasitic draw) – testing amps in series – we cover that process in this guide.

Other than trying to start the engine to see if there’s charge, the best way to decipher a car battery’s status is to test it using a multimeter. Digital multimeters are the best option for this since they give a more accurate reading, although you could also use an analog one. And even a cheap, category I (CAT-I) multimeter is fine as you are merely testing voltage, not amperage.

If you don’t know how to use a multimeter to test a car battery, read the procedure below:

Step 1: Set Multimeter
Ensure the ignition, lights and radio are off.

Select the DC volts position on your multimeter (or the 12V setting if you have a dedicated car battery test range). DC voltage is usually marked as a V followed by a short line with a dotted line beneath it. The wavy line after a V is AC (alternating current) voltage and is for checking the mains voltage in your house.

Most of the manual ranging meters have a 20V range, which is what you would need to test a car battery. The 20V range means it will measure between 0V and 20V. See below:

Step 2: Read Meter
The meter is now connected in parallel with the car battery and will display a reading automatically. Note the DC volts reading and compare with the table below, which indicates charge, under no-load, status:

Step 4: Check Results
Anything under the 75% charge rate, or about 12.45V, generally indicates the battery is undercharged and will need recharging. It does not, however, indicate that it is bad. If after recharging it doesn’t hold the charge, then it is probably on its way out.

Step 5: Recharge Battery
If it is under 12.45V, charge it up. You can do this with a portable charger plugged into the mains, which will apply gradual current and take time. The other option is to drive the car for around 30 minutes. Note: it is not enough to just start the engine and let it sit; you want it working under load to receive a proper charge from the alternator. Another option is to get the battery charged at your local auto parts store.

After charging, perform the same test as above to see if the battery now registers in the 12.6V range. If not, consider getting it checked out fully prior to a replacement.

When fully charged, the battery can be tested further using a couple of methods:

Load test: a load is applied to the battery while its voltage is monitored. You can do this by starting the engine and monitoring the voltage with a multimeter that has a Min/Max mode. This will automatically store the high and low voltages it picks up. The high voltage will likely be in the 14V area and is perfectly normal, while a drop under 9.6V during the process would indicate it can no longer effectively hold charge and needs changing.

Electronic test: checks the battery cells via a frequency test.

Some auto parts garages can perform these test for free, either by driving there or taking the battery in. Alternatively, repair shops may also offer a free test, plus the cost of potential repair.

WARNING: if you remove it, note that battery acid burns when in contact with the skin so handle with care.

There are different types of automotive battery chargers, from basic 2A trickle chargers to more expensive 10A general purpose devices. So-called smart chargers adjust their voltage output depending on the status of the battery and can charge faster and more efficiently. There is also less chance of overcharging and they can detect whether the batter is 6V or 12V, as well as the type (such as wet or gel cell) and adjust the output accordingly.

CAUTION: car batteries should never be overcharged. Once they reach full charge, it is time to unplug the charger. This is where smart units are advantageous, preventing damage and thus extra cost. Also, avoid running a known bad battery as you could end up ruining the alternator. They are built to maintain charge as opposed to keeping dead ones alive.

Of course, a repeatedly low charge doesn’t mean your battery is dead. It could be good and several scenarios might lead it to lose its charge: such as lights being left on, undriven for long periods, dodgy alternator, or even parasitic draw through any number of electrical circuits in the car going awry. Even an errant radio or internal light connection can repeatedly flatten a good one. But a positive outcome of the tests outlined above should prove the battery itself can hold a charge.

It is worth keeping on top of a battery that continually loses its charge as one that keeps dropping below 75 percent will eventually lead to damage. Most automotive batteries can last four or five years, but one under constant strain from a defective alternator or parasitic draw may fail earlier. On the other hand, if it is four years old and starting to flatten, it may need changing.

Charge may also be lost in the circuit through bad battery connections. As car batteries are low voltage, the connection needs to be that much better. As is the case with many cars, over time connections are prone to becoming loose, dirty and open to corrosion.

You can check for voltage drop between the battery terminals and cables by first testing on the terminal and then on the wire crimps going out. Anything over around 0.1V less than what is coming out of the terminals suggests high resistance/bad connection. Clean the terminals/connections with sandpaper and tighten them up.

When replacing a battery, it doesn’t have to be the same make, but it needs to have the same ratings. The replacement should have the same Cold Cranking Amps (CCA) rating (or higher) as the original. The CCA rating is critical since it is the projected amperage an engine draws when starting in cold weather conditions – i.e. when a car battery will be put under most strain. Put a lower rated CCA battery on an engine that is rated higher CCA and you’re in for problems as it will overload it. CCA is often several hundred maps, and even 1000CCA with larger vehicles.

You should also check the Reserve Capacity rating (RC), which is the time (in minutes) a battery will deliver 25A and maintain 10.5V. You are looking for a higher reserve capacity should the charging system fail.

Better batteries with a higher CCA rating tend to have better warranties attached to them, for obvious reasons. A new battery with a 72-month warranty would be in the premium bracket.

Installation: if installing a replacement yourself, ensure the terminals and the cables are cleaned off and in sound condition.

A Note About Multimeter Types

Some multimeters – usually the cheaper ones – tend to have both the AC and DC voltage ranges sharing the same position on the dial selector. Unless your multimeter is specifically made for the automotive market, it will likely default to AC voltage. Don’t fret as you can easily switch between the two, usually via a ‘select’ switch either below the display or in the center of the dial.

The basic Fluke 101 is an auto ranging multimeter with separate AC and DC voltage ranges: 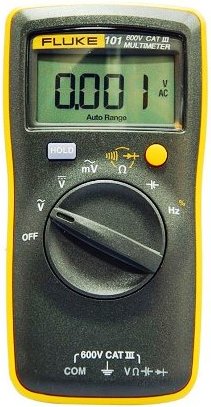 Most meters today are auto ranging, meaning after setting it to DC voltage, you won’t need to do anything else. The other, older type is a manual ranging multimeter, where you need to select the correct range regards the projected value of the circuit you are going to test. Most of the manual ranging meters have a 20V range, which is what you need to test a car battery. The 20V range means it will measure between 0V and 20V.

Tip: if you are a beginner looking how to use a multimeter to test a car battery to ascertain its voltage, consider getting one that has a dedicated battery tester range on it. The INNOVA 3320 is good for this. Other popular automotive multimeters include the INNOVA 3340 and the top of the line Fluke 88V.