Amprobe produces a vast range of multimeters, to include the popular XR-A Series. Good for general purpose electrics, electronics, HVAC and even heavier industry for the top model, they have an okay range of features and are of solid design. All come with battery, test leads and a handy magnetic hanger for hands-free usage. 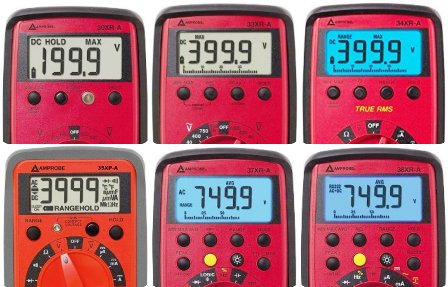 There are six in the Amprobe XR-A Series. Although the 35XR-A (or 35XP-A) isn’t technically of the XR Series, we’ve included it anyway as it shares similar features and specs:

Aside from the compact 35XP-A, they are full size DMMs with four jack inputs

30XR-A
This is the starter and cheapest of the series. A manual ranging multimeter, its main features are its non-contact voltage detector and dedicated battery test function. Voltage is to 600V and it measures all current ranges, including micro-amps. The 30XR-A will suit most trades, though is only rated for lower energy circuits – CAT-III to 300V. No backlight on its average screen and the lack of capacitance range are the main negatives. Read full review…

33XR-A
The slightly more expensive 33 also comes with temperature, capacitance and frequency ranges. There is also a Min/Max mode as well as peak hold. As with the 30, the display is not backlit, although it does have a quick, analog-style bar graph. Read full review…

34XR-A
Many go for the 34 as it is probably the best value for money. This is an auto ranging meter, with the ability to manual range. It also boasts True RMS response, so those into motor control get to accurately measure variable speed drives. It has all the ranges, including temperature, and the display is backlit. Read full review…

35XP-A
Often touted as the XP-A and not always included in the series, the 35 differs from the others in both its size and usage. It is a compact digital multimeter often used by those in the HVAC industries. Like the 30XR-A, it has a voltage sensor and micro-amps, but the screen isn’t backlit. Read full review…

37XR-A
This meter is perhaps the most popular. A True RMS-responder, it has all the ranges and modes (including Min/Max and Relative) and can also perform logic tests on components. In addition, it is more accurate, has a useful inductance range and the screen is backlit. Read full review…

38XR-A
At a similar price to the 37, the 38XR-A is a good value meter as it can check loop current on control applications as a percentage. It also has an RS232 port for PC connectivity and is a full range multimeter, complete with True RMS and a temperature range. In addition, it is rated to CAT-IV so is good in an industrial setting. Read full review…

These are general, all round meters, with definite differences between the top and bottom models. The 30XR-A can perform basic electric and electronic tasks, though is for low energies only. Along with the 33XR, it is a manual-ranging only meter, while the 34XR can auto-range, is True RMS and is backlit. The 37XR and 38XR have the best functionality and build quality, able to perform inductance/logic and loop current tests respectively. The 38 is the only industrially-rated meter.

The main negatives of the Amprobe XR-A Series tend to be with sluggish continuity and their somewhat underwhelming displays. Bearing in mind that this is an older range which has been somewhat superseded. These meters are still relevant today, however, with good accuracy and reliability, plus some tasty functionality on the more expensive models.

Alternative: The AM-500 series of multimeters is more modern with better displays and a generally better feature-set per given meter. Prices are in-line with, or cheaper than, the Amprobe XR-A Series.